From the Starchild Project

SUMMARY: Early in 2011, a geneticist attempting to recover Starchild Skull DNA identified several fragments that matched with human mitochondrial DNA (mtDNA). Comparing those fragments with matching fragments from human mtDNA produced an astonishing result. In every comparison, the Starchild presented many more nucleotide differences than are normally found among humans. In one comparison detailed in this report, the compared segments of human mtDNA came from one of its most highly conserved regions. Across 160 ± nucleotides in this segment, only 1 single variation is found among the 33 human haplogroups. In contrast, the same length of Starchild mtDNA has 17 differences! Of those 17, a significant number should be confirmed by multiple repetitions of the test. If several are confirmed (which is highly likely), would it be enough to consider establishing a new Earthly species? It would certainly throw open the door to serious consideration.

Please go to Starchild Project for all data

Conclusion & Call To Action: After 12 years of struggle, the Starchild Skull is truly poised to make history. When we have secured the funding needed to carry out the recovery and sequencing of its entire genome, it will provide uncontestable proof that at least once, 900 years ago, a being somewhat like us but definitely not human lived and died and was buried on our planet.

Unfortunately, achieving that historic moment requires far more than the Starchild Project team can deliver without substantial help. A wealthy investor—not merely a donor, an investor—must be found to provide the funding necessary to do what must be done.

In this extraordinarily special case, the investment needed is $7 million USD. Why that amount? Every step of the DNA recovery and sequencing process will have to be verified with multiple repetitions until no possible doubt remains about any specific result. Also, in order that those completed results can be confirmed by independent researchers, the entire process must be recorded on film for academic scrutiny and historic posterity.

The Starchild Project intends to incorporate some of that footage into creating two theater-quality documentary films during the 1.5 to 3 years required for the DNA’s recovery and analysis. These films will cover the Starchild Skull’s entire story, from its discovery to completion of the DNA analyses. They will be valuable both historically, as the record of this milestone event in human history, and financially, as market research indicates they will be enthusiastically welcomed in virtually every country on Earth.

It should be obvious to anyone that much more than $7 million can be made from two high quality films about such a pivotal shift in human awareness. If anyone reading this report personally knows anyone who might be interested in taking a front-and-center position as this historic event unfolds, please ask them to email: This email address is being protected from spambots. You need JavaScript enabled to view it..

A business proposal is available to any serious potential investor. The film project already has its producers, director, entertainment attorney, accountant, production team, and the enthusiastic cooperation of a state film council. Everything is in place except for the investment, the final hurdle that now requires only one astute decision to clear it.

Final Note: Explanations and terminology in this report are aimed at non-experts. Those with expert knowledge in genetics will naturally find its concepts and descriptions simplified.

The identity of certain research team members requires temporary anonymity. Their names will be revealed when they are ready to formally release reports for peer scrutiny.

Potential investors who want to know more, or to verify our geneticist’s work, can meet with him and tour his lab if they sign a Non-Disclosure Agreement. This will be on a case-by-case basis.

Please go to Starchild Project for all data 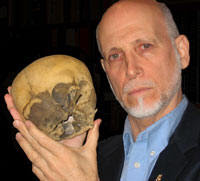 A reader, Kat, forwarded the following to me: 'Yesterday I received this newsletter update from Lloyd on DNA testing on the Starchild skull which is intended to determine whether it is actually part extraterrestrial.' I don't receive the newsletter but have written on Lloyd Pye's contentions. Please note, it was my impression that the geneticist on the 'MonsterQuest' episode of 'Lizard Monster' stated that the DNA of the 'Starchild Skull' was entirely human and the facial reconstruction determined that the skull was manipulated through binding...but I could be be wrong. Anyway, please read the following.

We finally have a recovery of nuclear DNA from the Starchild!

This past weekend I met with the geneticist working on the Starchild's DNA. He explained how he can now prove the Starchild is not entirely human, which has been our position for years. Now it is no longer a question of "if," but of "when" and "how" we spread this astounding new reality beyond the mailing list. First, though, let me bring the list's newcomers up to speed.

In 2003 we had a DNA analysis that used human-only primers to recover the Starchild's mitochondrial DNA, the DNA outside the nucleus, which comes from the mother and her genetic line. That meant its mother was human. But we could not recover its nuclear DNA, which comes from both mother and father, which meant its father was not a human. Unfortunately, with the recovery technology of 2003 we couldn't prove what he was, which left us in scientific limbo. The "no result" from the search for the nuclear DNA clearly meant Dad wasn't human, but we could not prove that fact beyond all possible doubt.

Now, in 2010, there have been many improvements in the recovery process, and those improvements have been applied to the Starchild skull with the stunning result you see below. This is a gel sheet that shows a clear recovery of its nuclear DNA, which could not be done in 2003.

The next two screen shots are taken from the national genetic database at the National Institute of Health, NIH. That public-access database is a centralized repository of all genetic information generated by geneticists all over the world, and now covers essentially all living organisms on Earth, from various kinds of viruses and bacteria, to various kinds of crustaceans and fish, to all kinds of animals and plants, including great apes and humans.

For many species, humans included, there are already nucleotide sequences covering entire genomes. Therefore, sequences from the Starchild's DNA can be directly compared against this vast database to look for any matches. In one such comparison below, you see the text below the blue line at the bottom (if you can read it, sorry it's so fuzzy) that 265 base pairs (a good length) of recovered Starchild nuclear DNA matches perfectly with a gene on human chromosome 1. This verifies beyond any degree of doubt that some of the nuclear DNA seen in the gel sheet is from a human being.

In the one below, and again at the bottom, you see the stunning report that in a string of 342 base pairs (another good length), "No significant similarity (is) found." To recover a stretch of base pairs as long as that with NO reference in the NIH database is astounding because it means there is no known earthly corollary for what has been analyzed! This incredible anomaly will put the Starchild in history books!!!

Please understand that this result has now been verified several times, and a few more different fragments have been identified that cannot be matched in this database to anything known. Despite that fact, mainstream skeptics will be obligated by their positions to try to say it's some kind of gibberish or some kind of mistake because in their world view it simply can't be true.

Luckily, their bleating protests can be easily overcome with continued repetition of the result, finding more and more similar fragments in the library that will be created from the Starchild's DNA, which is what the geneticist is confident will happen over the next weeks and months---nothing but verification that a significant part of the Starchild's genome is not found on Earth.

I should add that I still can't reveal the name of the geneticist or where he works until we are ready to formally present his results to the world. However, trust me, he is a well-established professional and his facility is large and very credible. They don't want to be bombarded by media until they are prepared for it, and neither do I for that matter. Just know that you are a part of the "inner circle" of those who have put your faith in a dream that is now coming true.

(1) I still don't know where the recent "MonsterQuest" episode "Lizard Monster" can be viewed on the internet by people outside the U.S. If anyone knows how that can be found, please let me know and I'll share with the list. Thanks!

(2) The expenses for materials doing our research has now outstripped the amount donated by the list. It is now coming out of my pocket and I could use some help to bridge that gap. However, look on the bright side. This should be the last time I ever have to ask for your help in this way. ;-) 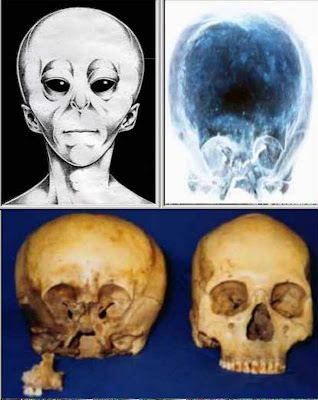 UFO Connection host Catherine Noble talks to researcher Loyd Pye on the finding of an alleged 'Aline Skull' that was found in a cave in Mexico and well known reporter and investigator Jamie Maussan about the sightings of UFOs by the Mexican Air Force.

Lloyd Pye, author of Everything You Know Is Wrong, has taken it upon himself to discover the identity of an unusual skull he has dubbed "The Starchild Skull." The skull, which was found in a mine shaft near Chihuahua, Mexico around 1930, is unusually wide at the back and exhibits larger than normal eye sockets. Although he says the origin of the skull is uncertain, Pye speculates on whether or not it could be of alien origin - or at least belonging to a human-alien hybrid. While some contend that the skull was merely that of a deformed human child, Pye wanted definitive proof and so, in late 1999, subjected the skull to DNA testing. The results of the test indicated that the skull was from a human being, but Pye points out that the lab could not extract sufficient strands of DNA to make a definitive conclusion, and therefore the question still remains open.

On the recent edition of 'UFO Hunters - The Grey Conspiracy', Pye indicated the fraternal DNA could not be found. His belief is that the 'Starchild' is probably an alien/human hybrid.

HomeFeaturedParanormalPremonitions Premonition of a Home Invasion in Omaha Nebraska

Had a Paranormal Experience? Mail it to us here